“The large recreation (approximation) of the artist’s studio backdrop –PRACTICE SHELVES #5– engages with tropes of still life painting … a flattening of space, playing with perspectives of foreground and background, perhaps even horizon, and is surprisingly true to scale! This nod to production, the stuff beyond thought, includes materials used in both analog and digital photographies: An inkjet printer butts up alongside buckets that once held processing chemicals; notebooks and scholarly tomes mingle with reams of coated paper and the special light-tight boxes used to preserve film negatives. A duster. A lense.”  From the curatorial essay by Kegan McFadden for the exhibition Studio Practice: Meditation Practice. 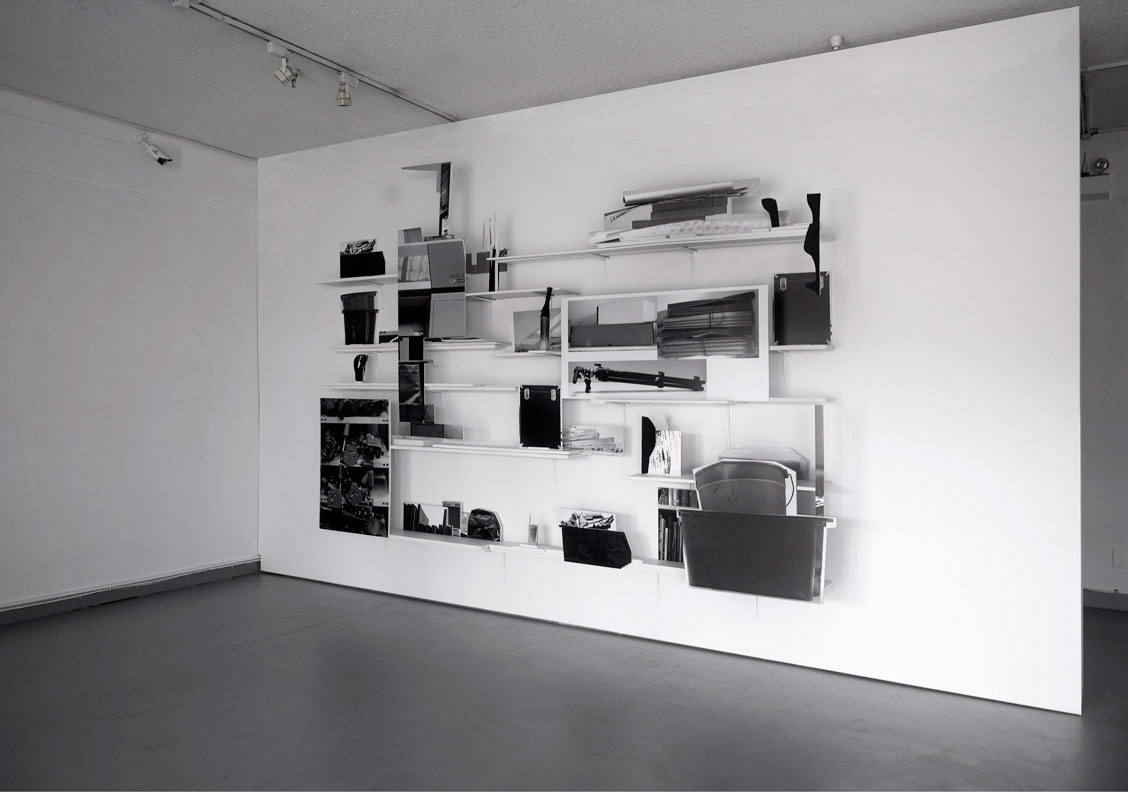 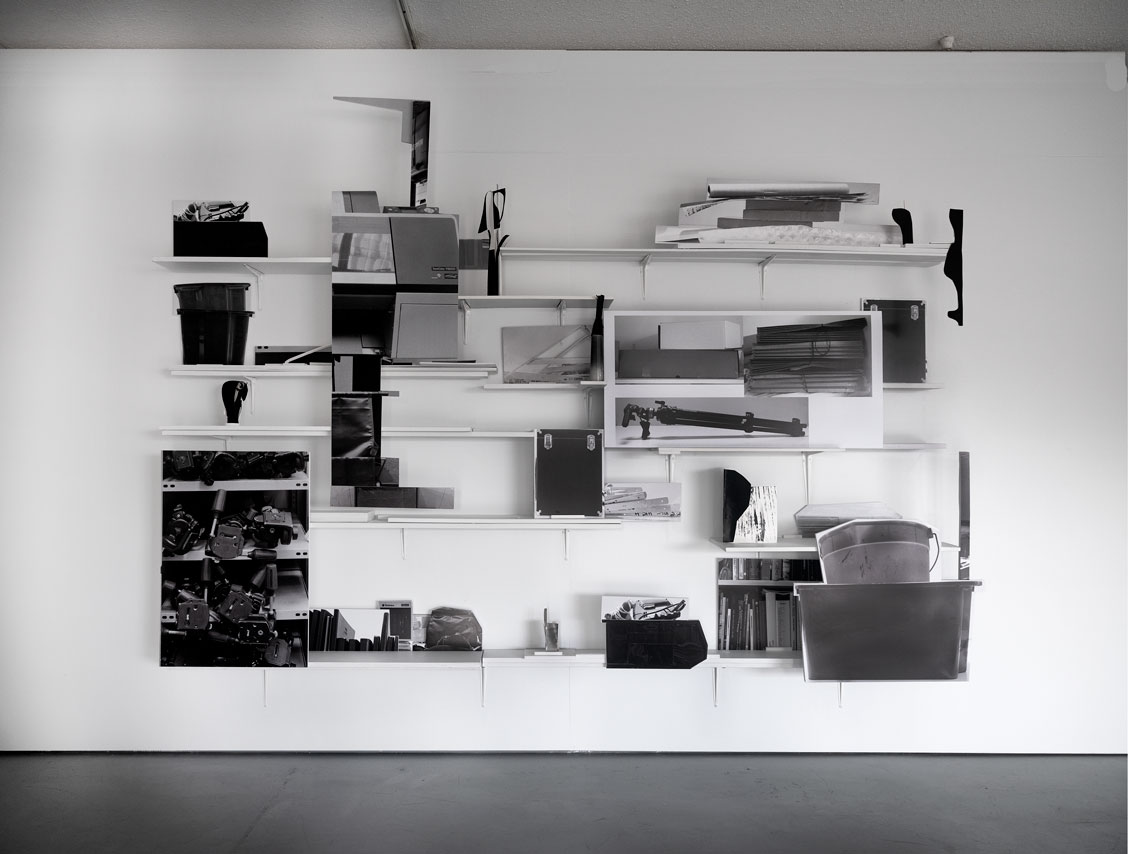 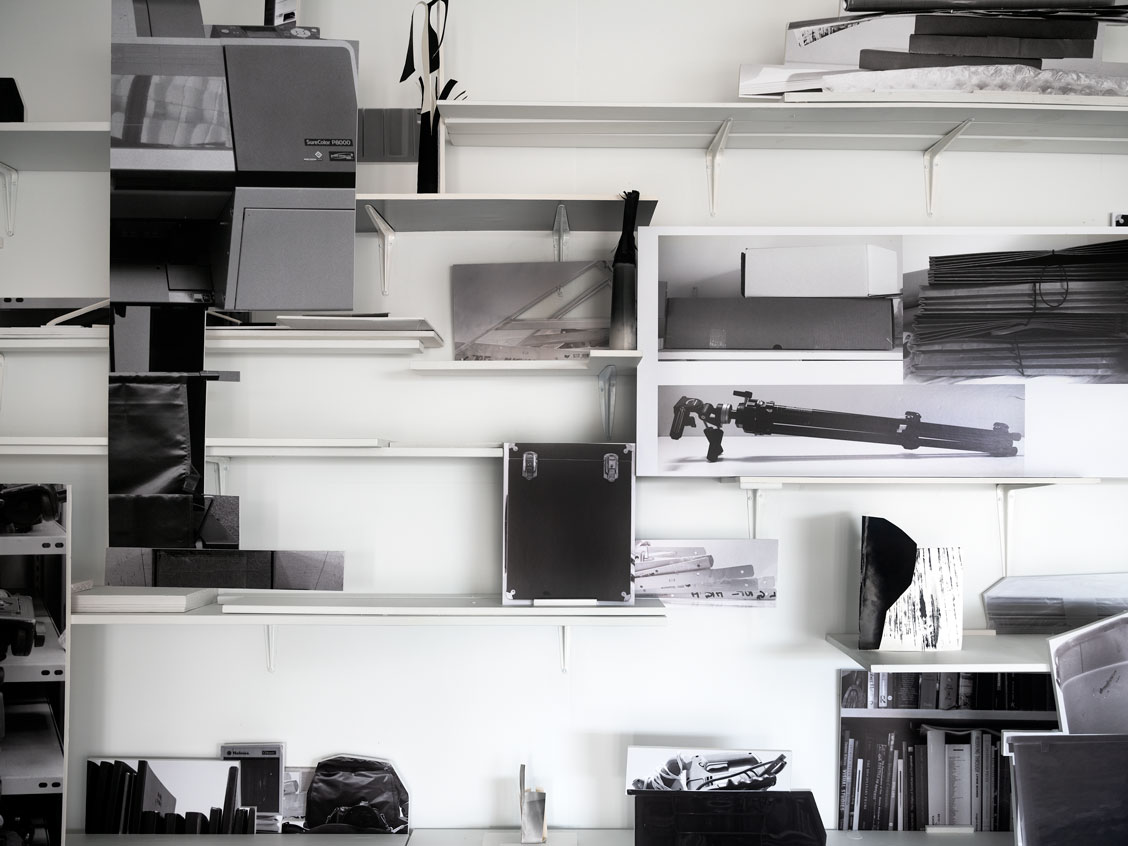 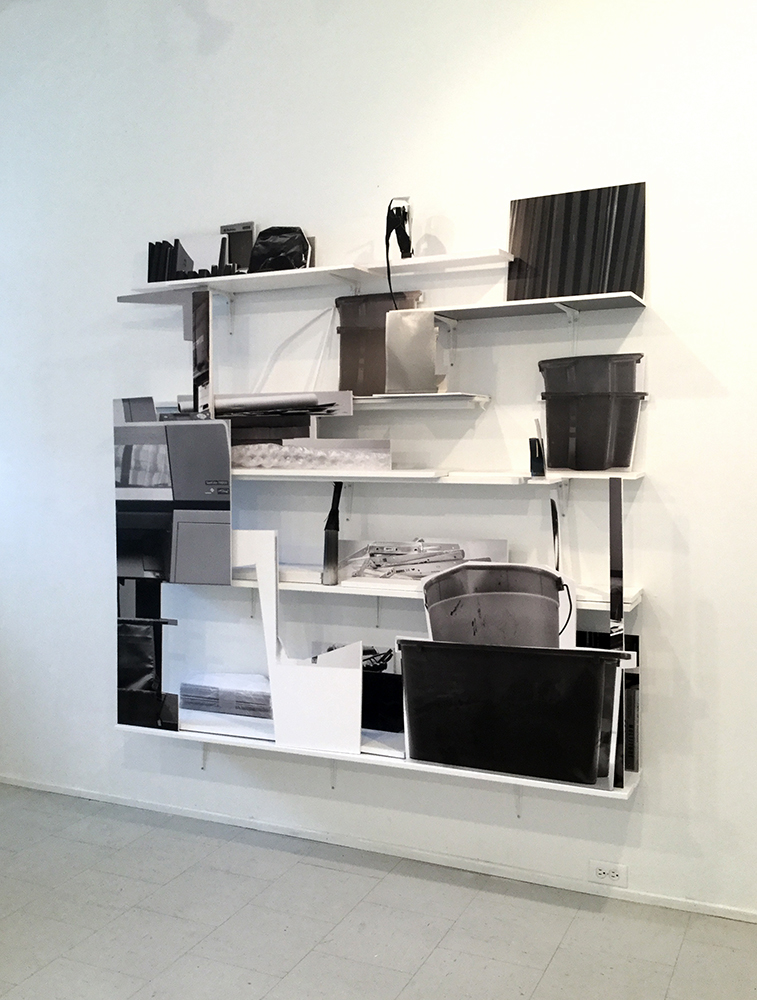 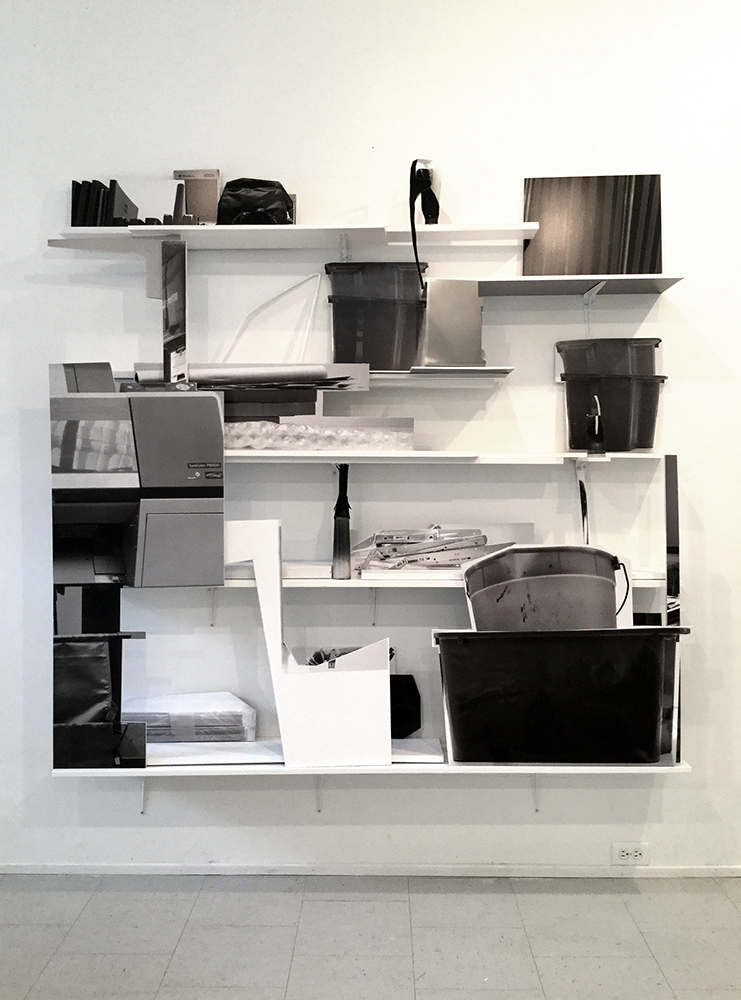 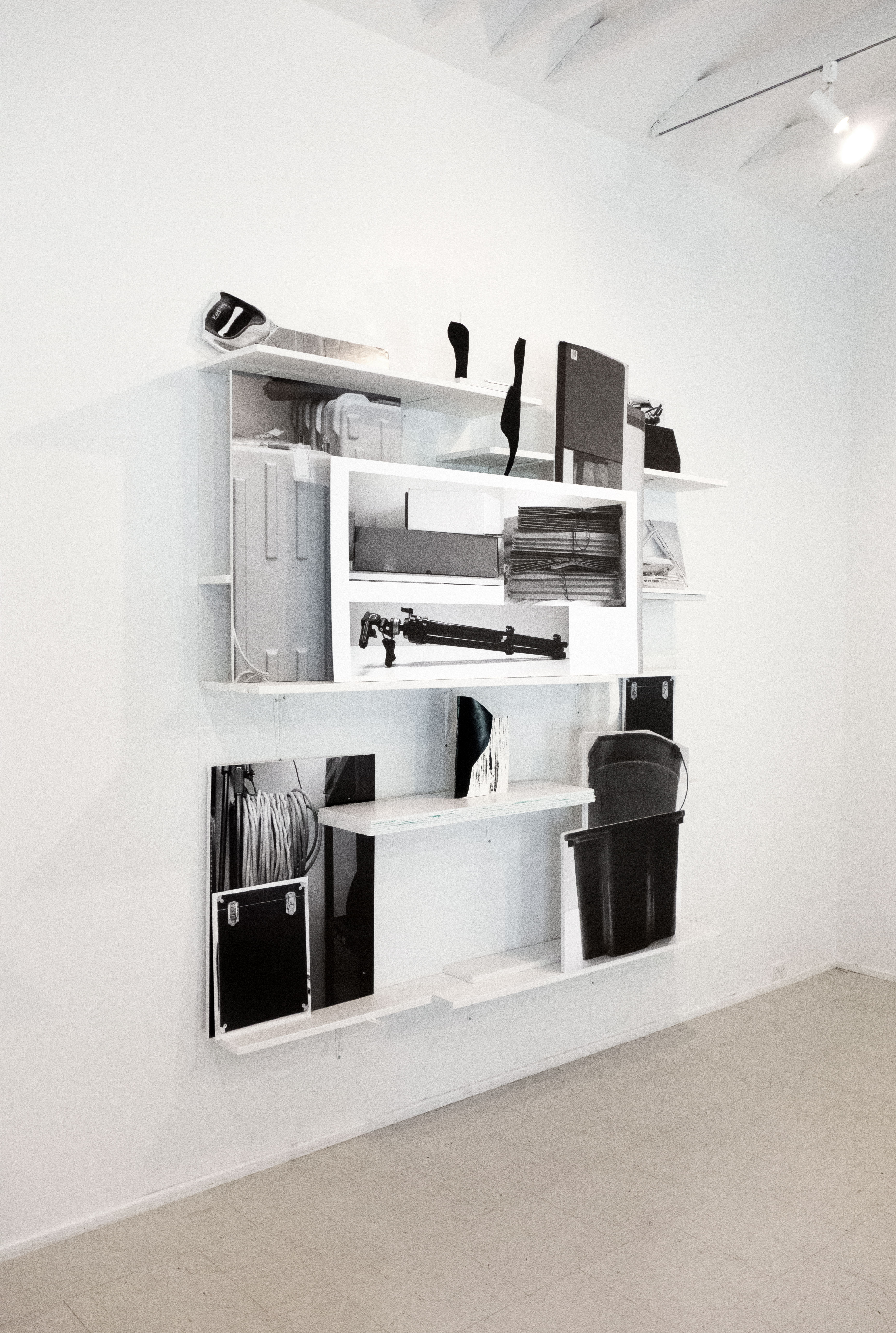 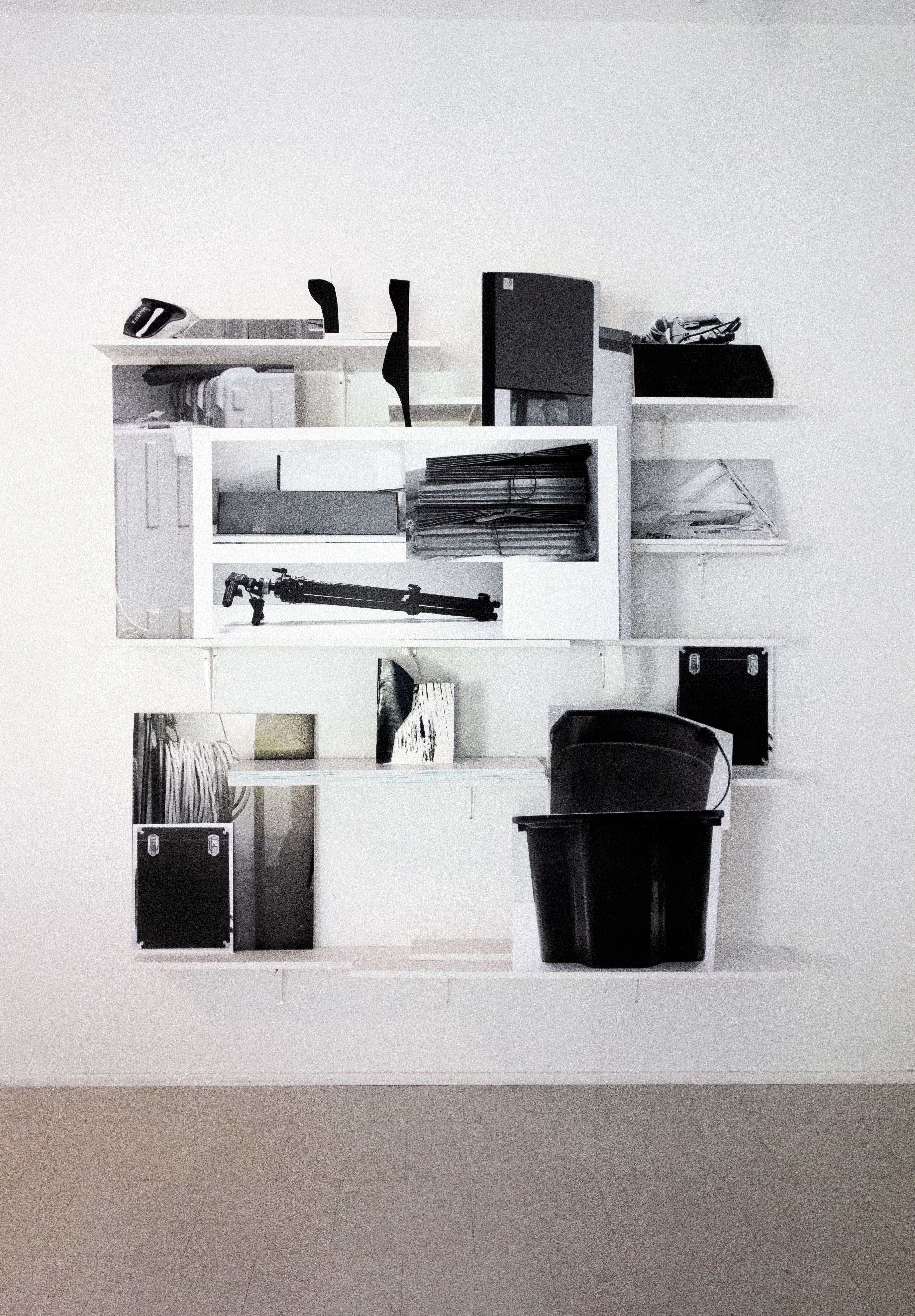 These ‘still life’ assemblages are art practice and at the same time are about art practice. Building upon my longstanding interest in the studio as a site of art making, I have shifted my attention towards the tools and materials of art production. The objects these photographs reference were once part of a lively flux of hands on activity in various sites from darkrooms to print labs to art studios etc. They are now static, frozen in the instant that the photograph was taken. Organized within a visual field, teetering between abstract forms and photographs of things in the world, these new objects become both the material and the subject for these ‘still life’ projects.

I meander around the studio taking pictures, pictures of the objects and materials that form a part of my everyday art practice. Later, I go to the darkroom at the university, then to the dry mounting room and the equipment sign-out room. Later that week I am shopping at Industrial Plastics and I photograph a stack of foam core; then at Lens and Shutter I photograph packages of fiber-based paper. Everywhere I encounter objects and materials that I use to make my work and as I click the camera lens the objects reflect their light onto 4” X 5” sheets of film. Over the past century the materials and processes that artists use have expanded exponentially as have the places in which they are encountered. No longer limited to the brush and canvas, chisel and wood they move freely through the world of the digital and the mass produced, consuming, borrowing, recycling and combining.

I like the way Mary Jane Jacobs speaks of art practice;