I was reading W.G. Sebald’s, The Rings of Saturn, and came across a passage where he speaks of two Persian friars who had brought the first eggs of the silkworm from China: “the silkworm moth Bombyx mori, which lives in white fruited mulberry trees is a member of the Bombycidae or spinners, a subspecies of the Lepidoptera which, together with the Saturnidae, includes some of the most beautiful of all moths…”

Just after reading this passage I went to the front porch get the mail. Clinging to the mailbox was a huge moth. It was about the size of the palm of my hand with brown markings and a large black eye-spot with rings on each of the back wings. Researching it on the internet I found it was a giant silk moth, Polyphemus of the family Saturnidae. Apparently the reference to Saturn is due to the concentric rings which make up the large spots on the wings. 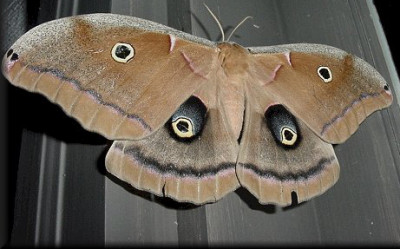 Reading on twenty pages or so The Rings of Saturn, ends with this passage of such poignancy:   “Now, as I write, and think once more of our history, which is but a long account of calamities, it occurs to me that at one time the only acceptable expression of profound grief, for ladies of the upper classes, was to wear heavy robes of black silk taffeta or black crepe de chine. Thus at Queen Victoria’s funeral, for example, the Duchess of Teck allegedly made her appearance in what contemporary fashion magazines described as a breathtaking gown with billowing veils, all of black Mantua silk of which the Norish silk weavers Willet & Nephew, just before the firm closed down for good, had created, uniquely for this occasion, and in order to demonstrate their unsurpassed skills in the manufacture of mourning silks, a length of some sixty paces. And Sir Thomas Browne, who was the son of a silk merchant and may well have had an eye for these things, remarks in a passage of the Pseudodoxia Epidemica that I can no longer find that in the Holland of this time it was customary, in a home where there had been a death, to drape black mourning ribbons over all the mirrors and all canvasses depicting landscapes or people or the fruits of the field, so that the soul, as it left the body, would not be distracted on its final journey, either by a reflection of itself or by a last glimpse of the land now being lost forever.” (pp. 295,296)