Saturday, October 24. The Long Exposure: Duration, meditation and the un-archivable, is one of three ‘open studio’ events that Trudi Lynn Smith and I staged in order to invite dialogue around a project that we had been working on involving photography and the studio space at 562 Fisgard Street. We  built a large-format 16 x 20” view camera and used it to make a series of 1:1 photographic images examining the wall of the studio as we peeled back its surface. The studio space is located in a building designed by architect John Teague who was hired by the Chinese Consolidated Benevolent Association in 1885. Both of us were drawn to the wall and the traces of lives left layered in the wall over the 100 years. The CCBA began renting the space to artists in Victoria as part of the re-development of Chinatown in the 1980s. 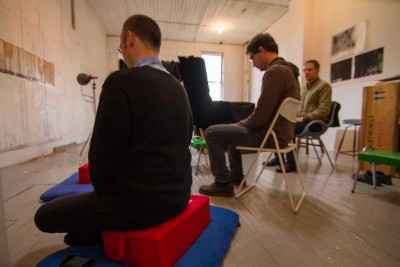 The duration needed to expose film in our 16×20” camera is 25 minutes and during this time we invited visitors to meditate on the wall for the corresponding 25 minutes.

This was the second of three ‘open studio’ events that we staged. The first, Reciprocity: the large camera and the studio wall looked at the relationship between analogue photography and the ‘real’. The third, The Artist Studio: Disappearances and reappearances looked at the lives of artist studios.

Previous Post: The Artist Studio: Disappearances and reappearances
Next Post: 1:1 (25 minutes) Reciprocity: The large camera and the studio wall