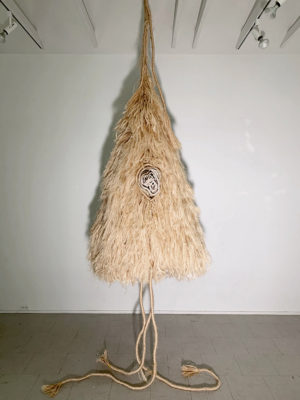 A curator working on research for a craft exhibition drew my attention to an image he had uncovered on the internet. It depicted a large sisal textile piece I had made in 1972 when I was in my early ‘20’s. Typical of museum archival material, the image was scanned from a slide and had curved corners and a magenta hue and was part of a larger story about a traveling exhibition in 1973.

The curator asked if I could lend the piece for the exhibition but I said that after 50 years it was not extant. He mentioned that although there were a number of textile sculptures made during this period few if any remained. They had for the most part been made by woman and had not been collected or saved. The idea of me re-making the work came up and after some thought I decided to embark on the project.

After some research I was able to get a loom together and buy the necessary sisal rope, cotton yarn and wool necessary for the project. The body of the piece was woven and employed the Scandinavian technique of rya rug knotting. Rather than using wool for the shaggy pile, sisal rope was unfurled and knotted onto a cotton warp. In addition, yarn wrapping techniques were employed for the tails and middle section.